Art trail at Lydney Harbour to be installed in April

As part of Forest of Dean District Council’s Destination Lydney Harbour regeneration project, a new art trail titled ‘From the Forest to the Sea’ will be installed in stages, beginning in April.

Inspired by the harbour’s role in the Forest of Dean’s industrial past and the natural beauty of the site, a new art trail has been created by artist duo, Denman + Gould.

“These striking artworks will help to put the harbour on the map and enhance the area’s reputation as a place to see nature, heritage and art all in one place.

“Together the sculptures will raise awareness and understanding of Lydney Harbour, and create a destination for a diverse audience to engage with the unique history of the harbour. We can’t wait for people to come down to the harbour and experience it for themselves.”

The artworks form a trail that starts at the A48 and continues along the former railway that once ran alongside the canal all the way to the harbour.

“Our work at Lydney responds to the historical relationship between the forest and the harbour, telling the story of journeys, transport and materials.”

The artwork trail begins at the A48 roundabout with ‘Tower’, a timber structure that alludes to the heavy timber constructions of the industrial revolution. The form is influenced by the cross braced supports of heavy machinery and relates to the stacks of extracted coal and imported timber seen in old photographs.

‘Sleepers’ are three playful, stacked sculptures that will connect the artwork on the A48 roundabout with the artwork at the harbour; they will be discoverable along a walking trail that leads to the harbour along the former railway.

Prior to the sculpture being installed on the A48 roundabout, some overgrown trees and vegetation will be cleared. A full report was conducted by a qualified Arboriculturalist in January to assess the trees and shrubs to give guidance for safe removal. The majority of trees were found to be self-set, in poor condition and were recommended to be felled.

The art trail will be followed by the installation of a lit footpath along Harbour Road from Lydney Train Station down to the privately-owned former Pine End Works site next to the harbour, this will also see the resurfacing of Harbour road. This work will be led by Gloucestershire Highways and is expected to begin later this year.

Lydney Harbour was built in the nineteenth century primarily for the transportation of coal and iron ore mined from the Forest of Dean, as well as for the import and export of timber. The site is now owned by the Environment Agency and is designated by Historic England as a Scheduled Monument.

The regeneration project, including the artworks, was funded by the national government’s Coastal Community Fund which is helping coastal communities flourish and strengthen their appeal as places to live, work and visit. The fund helps develop and improve local attractions, create jobs and promote socio-economic growth. 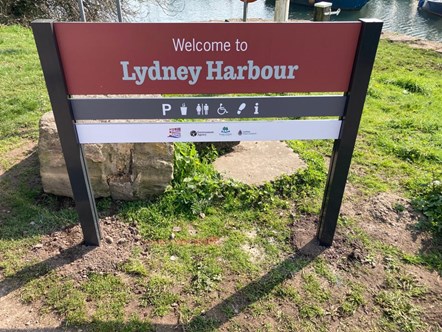