Forest of Dean District Council has awarded six time Olympian and Britain’s most successful female dressage rider Charlotte Dujardin the Freedom of the Forest of Dean.

“We’re incredibly proud of Charlotte’s achievements throughout her career and the way in which she has championed the Forest of Dean.

“Many of us would have watched in amazement as Ms Dujardin and her equine partners have consistently led the way for Great Britain in recent Olympics. Her tally of medals is remarkable and a testament to her talent, her efforts and her commitment.

“These are all traits that young people in the Forest of Dean can aspire to. We can't all become legendary Olympic champions of course, but young people should look at Miss Dujardin and be inspired to be the best that they can be, to be whatever they want to be and above all to do it here, in the wonderful Forest of Dean.

“The Freedom of this wonderful district is a great honour, it has taken a remarkable and sustained period of sporting success to be granted it and what it can mean to the young people of the area is even more precious.”

In Tokyo, she became Britain’s joint most accomplished female Olympian and the first British woman Olympian to win six medals at the Games as she added to her team dressage bronze with the same medal in the individual event.

“It is with great pride that I accept the honour of being given the Freedom of the Forest of Dean.

“The Forest is an incredible part of the world that I’m happy to call my home, and the district has been such a great support for both me and my career.

“I am honoured to receive this wonderful accolade and would like to thank all the Councillors and residents for their support.”

Chairman of Forest of Dean District Council, Cllr Julia Gooch and Leader of the Council, Cllr Tim Gwilliam present Charlotte Dujardin with the Freedom of the Forest. 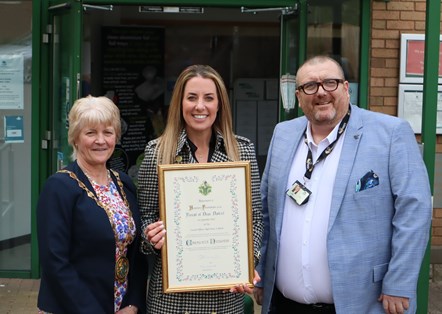