Members of Forest of Dean District Council aim to make the District carbon neutral by 2030.

Meeting on 6 December, members noted the Intergovernmental Panel on Climate Change’s (IPCC) warning that enormous harm would result from a 2 degree Centigrade rise in global warming compared with the Paris Agreement’s limit of a 1.5 degree increase.

In line with recommendations from the IPCC, the Councillors then decided to declare a ‘Climate Emergency’ with the aim of achieving carbon neutrality for Forest of Dean District Council and the district by 2030, taking into account both production and consumption emissions.

Cllr Tim Gwilliam is very keen to rise to this challenge,

“The climate change clock is ticking and the onus is on local authorities and other public and private organisations to take the boldest steps and reduce our CO2 emissions.  Currently these emissions amount to 6.5 tonnes per person per year and this figure needs to reduce to less than 2 tonnes as soon as possible.

“Cynics may argue that the risk of a 2 degree C rise in global warming is not a problem but they should realise that the extra half a degree rise above the Paris Agreement limit would worsen the risks of drought, floods, extreme heat and poverty significantly for hundreds of millions of people.

“In contrast, positive action on climate can deliver economic benefits in terms of new jobs, economic savings and market opportunities - as well as improved well-being for people worldwide.

“In the Forest of Dean we have a great opportunity to show the way by going carbon neutral.  We have a huge natural advantage as there are 27,000 acres of public forest estate within the District (21% of the total area), and abundant opportunities for clean renewable resources, including solar, wind and tidal lagoons. This means that we have the potential to become 100% self-reliant on zero-carbon energy within the next ten years or so.

“We will be calling on the government and other relevant organisations and partners to provide the powers, resources and funding to meet our 2030 target successfully.

“Provided we receive the necessary powers, resources and funding, we are eager to work with other councils and organisations – both within the UK and beyond – to determine and implement best practice methods to limit global warming to below 1.5 degrees C.

“We also intend to work closely with all our partners across the district, county and region to help deliver carbon neutrality through all relevant strategies and plans.” 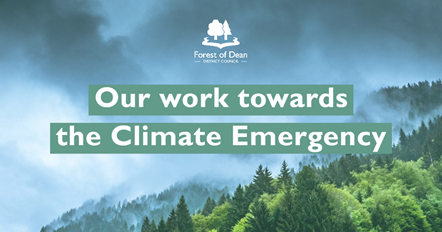