“We want to encourage communities to support members of the Armed Forces, as well as assisting service members to help the wider community, whether through participation in events and joint projects, or through other forms of engagement.

“We must never forget those who make the ultimate sacrifice and by signing this document we underline our commitment to members of the Armed Forces across the Forest of Dean and beyond.”

The Armed Forces Covenant brings together many other organisations, such as town and parish councils and newly reformed health and social care partners, reinforcing the intention to help all those who have served our country.

The agreement makes it easier for service personnel, families and veterans to access the help and support available from the Ministry of Defence. The scheme is intended to be a two-way arrangement, encouraging local Armed Forces members to do as much as they can to support their community and promote activity which integrates the service community into civilian life.

“Serving and former members of our Armed Forces and their families make a number of sacrifices in their own lives in order to protect our nation’s safety, security and way of life. The Armed Forces Community Covenant gives thanks for those sacrifices, and promises to help meet the unique needs of our forces community as a result of their service.

“I’m incredibly proud to represent our District’s only military establishment at Beachley, and to continue to encourage strong links between our reserve forces, cadets and veterans organisations with communities across the Forest as Armed Forces champion.

"By re-affirming our commitment to the armed forces covenant, I hope that we can give a new vigour to this work, and see more support and initiatives operating right across our area.” 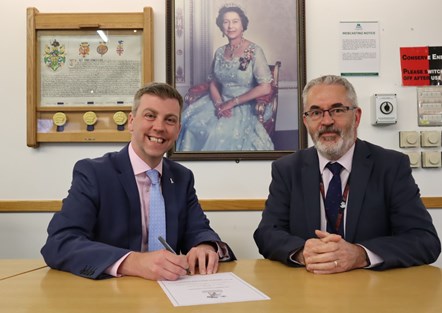