The resurfacing of Harbour Road largely rounds off the regeneration of Lydney Harbour, which has seen the transformation of the historic harbourfront; including the installation of a visitor hub, café and public artworks display.

“The resurfacing of Harbour Road was one of the final steps in completing the regeneration of Lydney Harbour. One of the main aims of the project was to develop the harbour into a recreation and tourism destination, improving access was essential in achieving this.

“Resurfacing the road brings the three year project closer to completion, making it easier for everyone to come and experience the brilliant new features at the site. I would like to thank everyone in the Forest of Dean District Council involved in delivering what has been a major regeneration project for us.

In 2019, a £2.1 million grant was secured from the Coastal Community Fund to regenerate Lydney Harbour. The aims of the project were to develop the area into a recreation and tourist destination by improving the harbour and access to it. Over the past three years extensive work has taken place to achieve these aims, culminating in the recent resurfacing of Harbour Road.

The first element of the project was the construction of a café and the refurbishment of the old mortuary buildings into toilets and a visitor information hub. Local Lydney-based business, Hips Social, have been running the café as ‘Hips Harbourside Café’ since December last year. Providing visitors with refreshments while they visit the Harbour. In addition to the café, Hips ensures that the toilets and visitor centre are open during the café’s opening hours (9am-4pm). Allowing visitors to learn more about the historic area during their visit.

To further highlight the industrial heritage of the harbour, artists ‘Dehhman+Gould’ have designed three distinct pieces of artwork that have been installed in the area. Entitled ‘Forest to the Sea’, visitors are able to follow a public artwork trail which traces a similar path to the coal that made its way from the Forest of Dean, to the harbour and out into the world.

The trial begins at the roundabout on the A48 and runs along the old railway line, finishing at the harbour. The first artwork along the trail is the ‘Tower’. Sitting in the centre of the roundabout, this large wooden structure reflects the timber cross-braced supports used extensively during the industrial era.

Finally, the most recently completed stage of the project was the resurfacing of Harbour Road - the access road to the area. Resurfaced through a partnership between Forest of Dean District Council and Gloucestershire County Council Highways, this stage has made the harbour more accessible. In addition to this, 150 trees were planted along the access corridor to improve biodiversity in the area, in keeping with the council’s commitment to the environment. There will also be a new lit-path constructed by the end of the year, completing the original pedestrian towpath. By improving access to the area, everyone can enjoy Destination Lydney Harbour and all the things it has to offer. 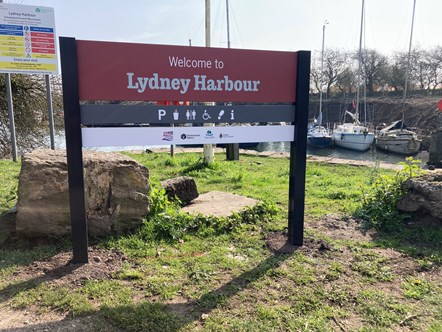