Two former Forest of Dean residents have been convicted in relation to offences under the Animal Welfare Act 2006.

Appearing at Cheltenham Magistrates Court on Monday 9 September 2019, Tanya Michelle Taylor of Gloucester and Jeff Taylor of Quedgeley were convicted and ordered to pay fines totalling £1010 and court costs of £800 after being found guilty of causing unnecessary suffering to a horse named Tallie.

The Magistrate in his summing up stated: “Tallie could not have been saved by early vet intervention, but it could have reduced her suffering.

The prosecution was brought by Forest of Dean District Council’s legal team following an investigation, after complaints from the previous owner and witnesses regarding the appalling condition of Tallie. Tallie was treated by Three Counties Hospital for multiple health issues in December 2017 but unfortunately had to be euthanized.

Councillor Tim Gwilliam, Leader of the Forest of Dean District Council said: “There’s never any pleasure to be gained from this or any of the other horrendous cases of animal cruelty and abuse that this Council has brought forward in recent times.

I am however proud that by our teams and officers working diligently together the Forest of Dean District Council is sending out a very clear and blunt message that such cruelty is not acceptable.”

The prosecution was undertaken by Officers in the Street Warden Team at the Council, assisted by the Council’s Counter Fraud Unit. Members of the public can contact the team with any concerns about animal welfare by email at street.wardens@fdean.gov.uk 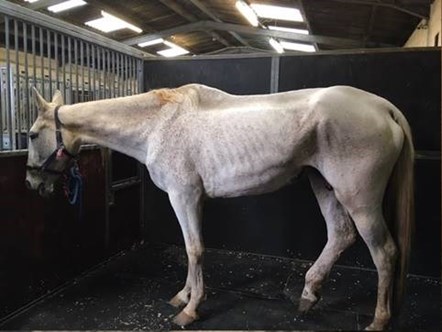