A major campaign has been launched across the Forest of Dean District today, to raise awareness of the problem of fly-tipping.

Originally created by the Hertfordshire Fly Tipping Group, the SCRAP Campaign has been run successfully in other areas of the country using know-how and resources from many local authorities to raise awareness of the issue among the wider public.

In the coming weeks, Forest of Dean District Council will be running an online campaign aimed at informing residents and businesses about the law and their obligations around fly-tipping, as well as highlighting key information such as how to check for a waste carrier’s licence and information on how to dispose of different types of waste.

Cllr Sid Phelps, Cabinet Member for Environment, Wildlife, Heritage and Culture, said: “Fly-tipping is unfortunately a regular occurrence in the District. It has a massive impact on both our communities and our environment. Our Street Wardens work very closely with Forestry England to catch and prosecute those involved. Often fly-tipping is on private land, and this affects landowners as well as residents.

“With the #SCRAPFlytipping toolkit we can raise awareness of the issue, and help to educate our residents and businesses on how to properly dispose of their waste.”

The campaign will also inform residents on how to report a fly-tip and highlight the penalties if caught fly-tipping.

Nationally, fly-tipping is on the rise and is reflected in the district with Council operatives regularly called to investigate and clear unsightly rubbish that has been dumped illegally, often on farmland or roadsides.

The Council’s campaign is being supported by Gloucestershire Police, who are often called to deal with instances of fly-tipping in the district, Forestry England, who are victims of fly-tipping on their land and the National Farmers Union, whose members are often negatively impacted. 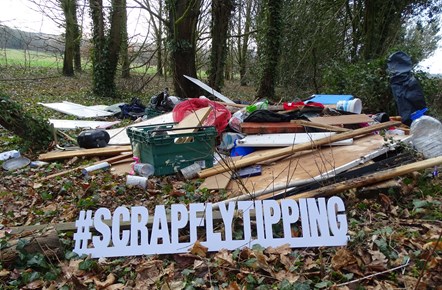